The most famous brand name of the NICO LAZARIDI Winery is related to the company’s history, as well as to the oenological revival of the Prefecture of Drama in 1987. The vineyard, where the grapes are cultivated, encompasses perimetrically the Château Nico Lazaridi Winery, which is fully adjusted to the natural environment.

A combination of the international varieties Sauvignon Blanc , along with the Greek varieties of Assytiko and Malagousia.

Completing this year’s three decades since CHÂTEAU NICO LAZARIDI’s first bottling is an opportunity not only for celebration but also for new beginnings: the three Château Nico Lazaridi wines, white, red and rosé, are now released with new labels, crafted by the Greek artist Giorgos Taxidis.

All three works depicted on the new labels together constitute a trilogy of man’s actions on the vine, placed in three separate time frames.  On the white wine label we see the harvest and the picking of the fruit – here is the present, the now. 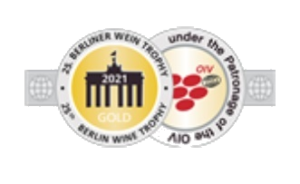 Château Nico Lazaridi White 2019 won the Gold Medal at the Berliner Wine Trophy international competition which was held in Berlin on February 2020. The flagship wine of NICO LAZARIDI winery has been distinguished in the largest and most important international wine competition organized under the auspices of OIV (International Organization of Vine and Wine). The 228 Berlin Wine Trophy independent jury members have tasted, singled out and awarded Château Nico Lazaridi White 2019 for its delightful blend that combines the aromatic richness and structure of Sauvignon Blanc with the crunchy acidity of Ugni Blanc and the floral brush strokes by the Muscat of Alexandria.

Château Nico Lazaridi White 2018 was awarded the Gold Medal at the Asia Wine Trophy and the Silver at the Berlin Wine Trophy (2019).

Tasting Notes: Bright yellow color. The new blend combines the aromatic complexity of the Sauvignon Blanc emphasizing the tropical and citrus notes which are combined with the richness and the acidity of the Assyrtiko and the floral notes of Malagousia. A wine with a pronounced intensity and aromas of mango, papaya, pineapple, citrus and lemongrass, wet stone, and white flowers. Full mouth with pleasant crispy acidity and long aromatic aftertaste.

Aging: Will respond to aging for up to 3-4 years after harvest.

Perfect Pairing: Served at 8-12°C, an excellent match for cooked dishes with vegetables, pasta with basil sauce and salads with goat cheese.

Order from the Wine Zoo
Prev
Next